Close up of writing on bottom 1/3 of poster 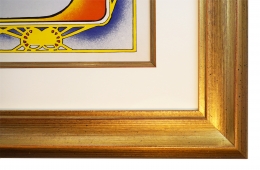 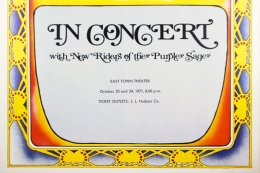 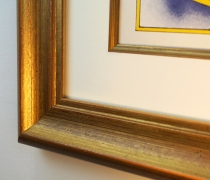 This poster is called a “tour blank,” which was printed in color and then were used by local promoters who overprinted their location and dates in black. The double live album, Grateful Dead, aka Skull & Roses, was released on October 24th – during this pair of shows at the Eastown Theatre in Detroit (misspelled as "East Town" on the poster). The artwork from the album was used for the tour blank – an indicator of Warner Brothers involvement in the Dead's Fall '71 tour.

The Grateful Dead delivered two successful albums to Warner Brothers in 1970. While Warner had initially considered the Dead a sort of prestige cult act in the 60s, the band had surprised the label by releasing the very accessible Workingman's Dead in June 1970, just as FM radio was becoming a nationwide phenomenon. They followed it up with American Beauty in November 1970, which FM DJs liked even better. Warner Brothers rewarded the Dead with $100,000 in marketing dollars for Skull and Roses – and part of that money was spent on promotion like this poster.

The bulk of the rock audience in 1970 was young people in suburbs and colleges. Many of them might have heard of the Grateful Dead in a sort of legendary way, but the first music they heard by the Dead were probably songs like "Uncle John's Band," "Casey Jones," "Friend of The Devil" and "Truckin'"from those albums played on the local FM station.

The concept of free radio broadcasts in multiple cities was radical stuff, indeed. Up until this time, there had been relatively few live FM broadcasts of rock bands. The Dead pushed to spend the rest of the Warner promotional money on playing 15 live broadcasts of complete concerts all across the country. Such an extravaganza was never duplicated again, but it had far-reaching implications for the Dead, spreading their music and legend far and wide to young rock fans who would not otherwise have been able to see them.

The cross-country radio broadcasts helped propel the album into gold record status. Once purely a hippie band, the Grateful Dead were now big business. Interestingly, no other band dared broadcasting live shows across the country - perhaps out of fear that they would be implicitly conceding that every show they did was the same, or the fear of bootlegging. The success of these broadcasts did inspire the creation of the famous King Biscuit Flower Hour broadcasting every Sunday night beginning in February 1973.