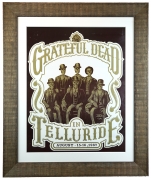 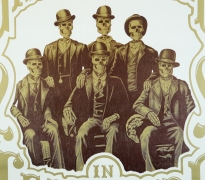 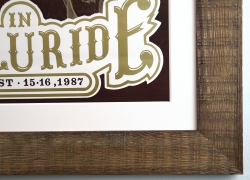 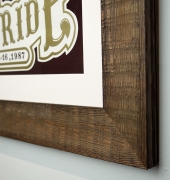 NOTE: This piece just sold - Please let us know if you would like to be contacted when we come across another one  -  ted@bahrgallery.com

These legendary shows took place at Telluride, the popular ski town which billed itself as the Festival Capital of the World. Bill Graham owned a house in town and argued in favor of holding these special shows. But the festivals they usually held brought about 3-5,000 people and the capacity Graham was looking at was closer to 12,000. There was only one road in and out of the small community of 1,800 and so flyers were circulated at the preceding Red Rocks shows along with a full page ad in the Denver Post requesting those without tickets to not come.

These shows were played in the shadow of some of the most majestic mountains in the country. It was the weekend of the “harmonic convergence,” a once in a lifetime alignment of the stars, forecast by the Mayan God Quetzalcoatl, marking the beginning of a new age of peace and harmony [yeah, well…].

The poster for these shows is a mock-up of the famous photo of Butch Cassidy & the Wild Bunch - as skeletons. Butch Cassidy became an outlaw in Telluride, robbing his first bank there in 1889. Artist Steve Johannsen is a professional artist who grew up in and was heavily influenced by art from the late 60s who has been creating powerful images his whole life. Primary focuses are on Rock Art, personal commissions and personal art.