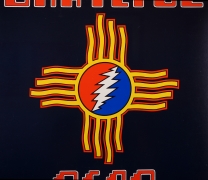 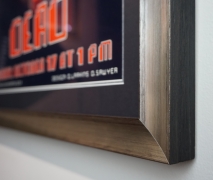 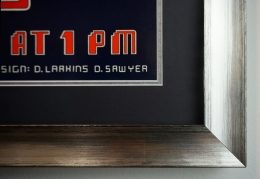 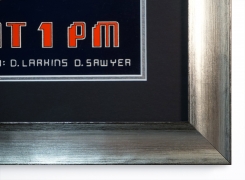 This poster with a wonderful Native American theme to befit an appearance in New Mexico was designed by Dennis Larkins. There are two versions, one with extra information at the bottom on where tickets were sold, and one without that information that was sold on site – this poster is that version. The show was full of fun surprises like a boatload of roses thrown out to the crowd to start the show and Phil donning an outrageously large sombrero hat. There was one epic an epic rainbow and one can imagine what it must have been like watching the Dead with the sun setting on the Sangre de Cristo Mountains in the background


From the dawn of 1980 to the end of 1983, the Dead were on a serious roll. Each year had its own first-rate shows and top-notch tours, but each of these four years were uniformly strong. 1982 is probably the most underrated of these years, and this particular show is the big-time gem from the fall of 1982. You can stream the show here:   http://archive.org/details/gd82-10-17.fob-aud.miller.18108.sbeok.shnf


On this poster itself, the artist, Dennis Larkins, writes, “there are two versions of this poster that they were all printed at the same time but only a small number were left with the ticket info along the bottom to be used promotionally in the local advertising period before the show. I remember that Santa Fe was plastered with them (I lived there at the time) on telephone poles, in store windows, etc. I don't know how many were used this way but most were either trashed or stolen in the process. Most of the print run had the bottom trimmed off and were offered for sale at the show. I don't recall the amount of total production nor do I know how many were sold on the day of the show. Nevertheless, this was a low production poster, at best. This same design was also used for an event t-shirt and even made its way onto bandanas. I remember the Dead sold these items in their catalogue for some time after the event but not the poster as they were either all sold at the concert or the remainder distributed among the promoter's friends and participants. There has certainly never been another printing of this poster or bootleg copy.”