This Piece Hung in a Show at the Nassau County Museum of Art,  March-July 2019 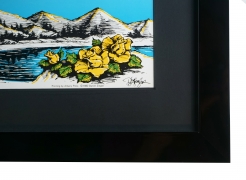 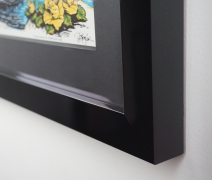 This poster was designed to promote a 3-night run at the Greek Theatre on the campus of the University of California in Berkeley, CA. The Dead had played there in 1981 and it became a staple of their SF Bay Area appearances – their outdoor, “home court” – until the much larger Shoreline Amphitheatre was built in 1986.

The Grateful Dead played 725 shows during the 1980s and in the next decade the Dead would gross more touring revenue than any band in the world not named the Rolling Stones, even though they stopped touring after lead guitarist Jerry Garcia died in 1995.

This was all despite only one Top Ten single in their career. The popularity of the Grateful Dead experience – and the growing number of “Deadheads” following them can be seen as a reaction to the sweeping conservatism of the 1980s represented by Ronald Reagan’s two-term Presidency. The Dead never varied in what they did or what they stood for and popularity, respect, and ticket sales eventually caught up with them. While the band insisted that they simply played the music (or, “the music played the band”), the culture that followed them out of the late 1960s was just getting bigger and bigger and acted as a tie-dyed counterweight to 1980s glitz and glamour.

In this poster, artist Danny Zeigler keeps it simple and straightforward in a reflection of the times with a simple, emphatic yellow slash underscoring the band’s name and leading to a solidly grounded skull, nestled in or perhaps carved out of the mountains, a Deadhead’s Mt Rushmore.