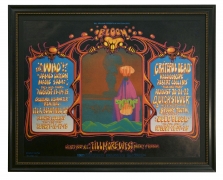 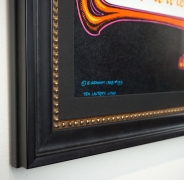 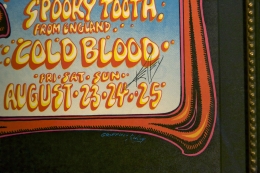 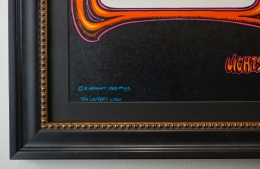 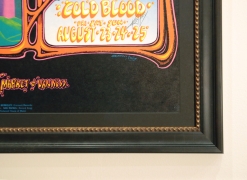 The Who and The Grateful Dead – wow!  BG-133 advertised four consecutive Fillmore West mid-week and weekend concerts in 1968. This collaboration by Alton Kelley and Rick Griffin features central design of a ghost-like image with a hand above and below,  the lower hand holding some sort of Aztec serpent sculpture. A triptych in design, Griffin used hand-drawn color plates to make 3-D images project from the background, and the frames of the panel appear to be insect legs. The image's central background of an ominous looking mushroom cloud contrasts with the happy bubble-infused, cartoon-style lettering of the side panels.

The summer of 1968 was the Who’s third tour of the US after their triumphant introduction to American audiences at Monterrey Pop a year earlier. They were still riding on the strength of the 1967 single “I Can See for Miles,”  and Pete Townshend was working on composing “Tommy, A Rock Opera.” The Dead, meanwhile, were working with some of their classics including St Stephen, Dark Star, The Other One, LoveLight, Death Don’t Have no Mercy, and Alligator.