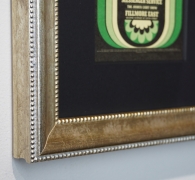 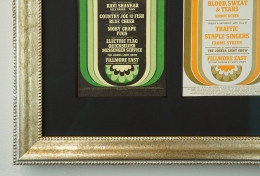 The Fillmore East was rock promoter Bill Graham's rock venue on Second Avenue near East 6th Street in the (at the time) Lower East Side neighborhood, now called the East Village. It was open from March 8, 1968, to June 27, 1971, and featured some of the biggest acts in rock music at the time. The Fillmore East was a companion to Graham's Fillmore Auditorium, and its successor, the Fillmore West, in San Francisco, Graham's home base.

As the 2,600 seat venue established itself as “must attend” for the hippies and music-loving teenagers of New York and it started selling out consistently no matter who was playing. So the Spring of 1968 saw the only posters for the Fillmore East – six of them – with the exception of a poster for The Who playing Tommy in the fall of 1969. Preferred by Graham were postcards like these which were cheaper and could be used over a period of several weeks.

While artist David Byrd was tasked with the "arty" stuff-like posters, program covers, etc.. Design agency Willson-Frissora did a lot of the "nuts and bolts work like the newspaper ad materials and more basic layouts like these postcards and handbills. They are mentioned in the Fillmore East programs on the staff page.