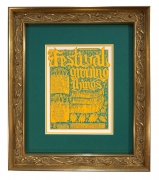 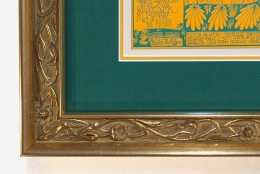 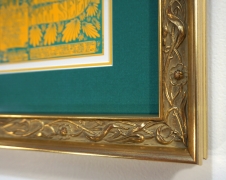 The Festival of Growing Things was a two-day event held in Marin County in 1967. The event was a to celebrate hippies’ favorite flower, why, marijuana, of course! The poster features stylized marijuana leaves and the event advertised “Free Seeds,” and “barefoot dancing on the grass.” The headlining bands were all local, with Quicksilver on Saturday and Big Brother on Sunday.

The artwork was done by Alan Terk, also known as “Gut.” Gut was an interesting character; he was the manager of Blue Cheer and also a Hells Angel (and one-time President of the San Bernadino Chapter) as well as a poster artist. He produced several posters for the San Francisco dance halls as well as some for Hells Angel events.

The Cushing Memorial Amphitheatre is a natural amphitheater located high on Mt. Tamalpais just north of San Francisco which was fitted with carved stone seating in 1933. Just a few weeks before this festival, Mt. Tam played host to what is generally considered the first outdoor rock festival, the Magic Mountain Festival on June 10 and 11, 1967, which was attended by more than 36,000 people, one week before the Monterey Pop Festival. And in fact, this festival took place just a few weeks after Monterey Pop!