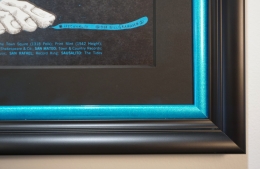 Lee Conklin pulled together a wild and dystopian design for this poster which is best viewed first from afar. In a nod to Hieronymus Bosch’s 16th century Garden of Earthly Delights, bodies tangle and hands clutch in a hellish human collage. [Yard] birds make up the lower part of the face’s jaw and also frame the Y in Yardbirds and the entire piece is filled with subtle sight gags and references that delight and reward a long hard look from up close. Conklin contributed 33 psychedelic posters for Bill Graham concerts alone.

By 1968, the psychedelic blues rock of Cream and the Jimi Hendrix Experience was enormously popular, yet Keith Relf and Jim McCarty of the Yardbirds wanted to pursue a style influenced by folk and classical music. The Yardbirds guitarist, Jimmy Page, wanted to continue with the kind of "heavy" music for which his next band, Led Zeppelin would become iconic. By March 1968, Relf and McCarty had decided to leave but were persuaded to stay at least for one more American tour. These shows were close to the end of their tour.

It’s a Beautiful Day wrote their most famous song, White Bird, while living in an attic in Seattle, caged there by their manager Matthew Katz who said they were not ready for prime time yet. Katz managed Jefferson Airplane and Moby Grape but the bands were trying to escape him, unbeknownst to It’s a Beautiful Day. At this point in time, they were still more than a year away from the release of their first album but they had stirred up a lot of local attention in San Francisco. While Woodstock promoter Michael Lang was negotiating with Bill Graham to get the Grateful Dead on the bill, Graham insisted he take one of the new SF groups, It’s a Beautiful Day or Santana. Lang listened to and loved both so he flipped a coin. Santana won and became huge breakout stars at Woodstock.