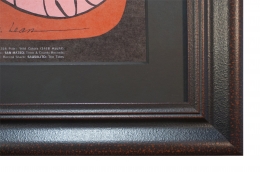 Bonnie MacLean designed this beautiful and popular image where the band names roll across a regal and gorgeous woman’s headdress. It features Eric Burden and the Animals and heralds the first appearance in concert in San Francisco of the Hour Glass with Duane and Gregg Allman.

Bonnie MacLean was married to Bill Graham and stepped in to design many Fillmore posters after Wes Wilson was fired in April, 1967. MacLean had taken art classes at Pratt before moving West in the mid 1960s and she shows a slightly more restrained or studied psychedelic style.

The original Animals, led by Eric Burden, were one of the most important early English British Invasion bands with deep roots in American Blues. They had many hits including “House of the Rising Sun", "We Gotta Get Out of This Place", "It's My Life", "I'm Crying" and "Don't Let Me Be Misunderstood". But by the Fall of 1966 the group had fallen apart. In December of ’66, a new band was formed under the name Eric Burdon and The Animals (or sometimes Eric Burdon and the New Animals) in December 1966 and changed direction. The hard driving blues was transformed into Burdon's version of psychedelia and they relocated to California and became a spokesman for the Love Generation.

Early performances did not include any of the songs for which the original Animals had become known. Some of this group's hits included "San Franciscan Nights", "Monterey" (a tribute to the 1967 Monterey Pop Festival), and "Sky Pilot". This weekend at the Fillmore closely followed the release of their debut album, “Winds of Change.”

The Hour Glass was a band featuring Gregg and Duane Allman, as well as ultimate Marshall Tucker Band producer Paul Hornsby based in Los Angeles in 1967 and 1968.

During their time as the Hour Glass, the LA-based band recorded two albums (one of which included an early, “"It's Not My Cross to Bear,") made 5 trips to play in San Francisco Bay Area.