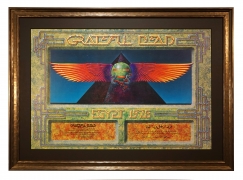 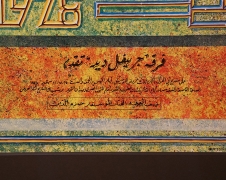 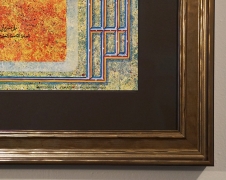 This beautiful image was used to advertise the Grateful Dead shows in Egypt in 1978. This image was later used again for a cancelled show at the Rainbow Theater in London and yet again for the remainder of the 1978 European Tour. Of the three, the original Egypt poster is by far the toughest to find. These shows were held at the Gizeh Sound & Light Theater in Cairo at the, Egypt (in the shadow of The Sphinx). This is one of the more memorable Dead images (from some of the more memorable Dead shows), featuring the concert/ticket info in both English and Arabic.

The decision to play in Egypt was the brainchild of Phil Lesh. "It sort of became my project because I was one of the first people in the band who was on the trip of playing at places of power," he said in The Grateful Dead Reader. "You know, power that's been preserved from the ancient world. The pyramids are the obvious number one choice because no matter what anyone thinks they might be, there is definitely some kind of mojo about the pyramids."

Fans from all over the world traveled to Egypt to catch the band at the historic site, and for the last show on Sept. 16, they witnessed a total lunar eclipse during the concert. Although the performances are considered to be uneven, there are still plenty of highlights, including the second live performance of "Shakedown Street," which had yet to be recorded, and "Stella Blue." There is a CD for the last two dates available, called “Rocking The Cradle: Egypt 1978.”  The group also brought on Egyptian oud player Hamza El Din for his song "Ollin Arageed," and he stayed on for "Fire on the Mountain" which moved into "Iko Iko."