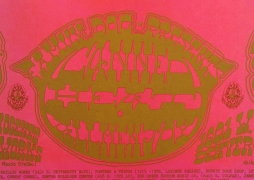 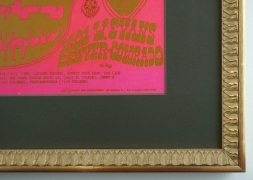 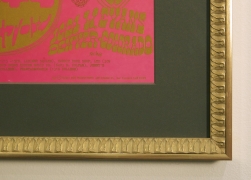 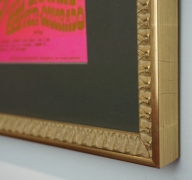 This haunting yet beautiful image of a woman’s face peaks through a red-orange haze that leaves a myriad of questions in the mind of the beholder.  One of the psychedelic era posters that would look great in any room, the bands featured were Canned Heat and Allmen Joy.

Canned Heat was an American rock band formed in Los Angeles in 1965 by two blues enthusiasts, Alan Wilson and Bob Hite, who took the name from Tommy Johnson's 1928 "Canned Heat Blues", a song about an alcoholic who had desperately turned to drinking Sterno, which was originally marketed as "canned heat"

The music and attitude of Canned Heat afforded them a large following and established the band as one of the popular acts of the hippie era. After appearances at the Monterey and Woodstock festivals at the end of the 1960s, the band acquired worldwide fame. Canned Heat appeared at most major musical events at the end of the 1960s, performing blues standards along with their own material and occasionally indulging in lengthy 'psychedelic' solos. Two of their songs – "Going Up the Country" and "On the Road Again" – became international hits.

Allmen Joy was a psychedelic garage band that, while hitless, were big enough to convince another group, the Allman Joys, to change their name first to Hour Glass  and then the Allman Brothers Band.