Children of the Future 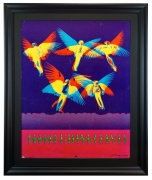 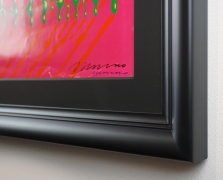 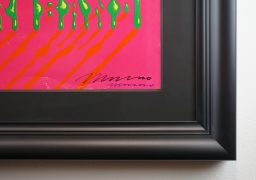 This beautiful Neon Rose poster was designed as a promotional poster for the first Steve Miller album, Children of the Future. It must have been printed in a relatively small quantity because it is one of the most difficult Neon Rose posters to find in any condition. The design features band members flying with Moscoso vibrating wings which create an optical illusion. If one is able to alternate pure blue and pure red lights the wings will appear to move. The lettering at the bottom (also used by Rick Griffin) is some of the most challenging in the psychedelic genre – see if you can figure it out.

Released in June, 1968 by Capital Records, Children of the Future is the debut album by the Steve Miller Band. The album was produced by notable British record producer/engineer, Glyn Johns, who went on to produce another successful American band: The Eagles. Early Steve Miller albums were quite psychedelic and this one featured some real beauties such as  the title track and “In My First Mind.” Another tune, “Baby's Callin' Me Home" was written by band member Boz Scaggs who later rose to considerable global fame in his own right.

The style is a mixture of blues and psychedelic rock reflecting the ambience of the British blues revival, not surprisingly considering the album was recorded at Olympic Studios in London. Rolling Stone described the first side as being "constructed like Sgt Pepper". Writing in Crawdaddy, Peter Knobler called the album "a triple moment of experience, knowledge, inspiration." However, many of the songs had been written earlier when Miller was working as a janitor at a Texas music studio.