Inspiration for the "Almost Famous" movie poster made in 2000 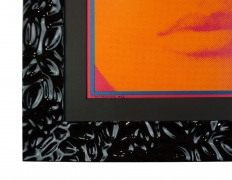 One of the most iconic images of the psychedelic period, this piece takes a much more subtle approach to the genre, mixing in the usual bright neon colors with a minimalist feel and only when looking closely at the sunglasses do you get let in on the secret (the name of the band, venue and dates).  This poster shines at a distance however as the facial features become three-dimensional and the colors richen. The image was clipped out of a magazine by Victor Moscoso late at night on deadline. Perhaps sometimes the best art isn’t labored over!

The Chambers Brothers began as a gospel group that migrated to the burgeoning folk music movement in the early 1960’s. They played at the 1965 Newport Folk Festival where Bob Dylan “went electric,” which they began to do following the event as well. They scored their biggest hit in 1968 with, “Time has Come Today,” which was an 11-minute tripped out drum-driven song, which also had a shortened version living just outside the Billboard Top Ten for 8 weeks. The song contains the immortal line, “and my soul’s been psychedelicized.”

This poster was only printed once because when it came out Moscoso did not think of it as popular enough to warrant another run – all of his reprinted posters he produced in 1967 or 1968 and then he moved on. Perception of the poster changed when it was used as the inspiration for the Cameron Crowe coming-of-age movie “Almost Famous,” which came out in 2000 with a photograph of star Kate Hudson in mirror sunglasses. Sadly, Moscoso was not compensated for the inspiration as the work was different enough to fall outside of copyright laws.