Close-up of frame at angle 1 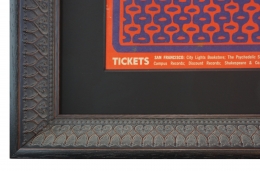 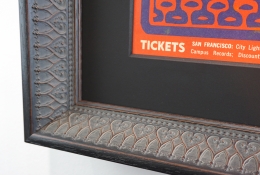 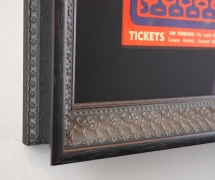 This 1966 Captain Beefheart poster is very scarce and always in demand. This Wes Wilson design is simple yet elegant, combining a beautiful portrait of an Egyptian-looking woman along with the trademark Wilson lettering along the right side.

Born Don Van Vliet, Captain Beefheart was one of modern music's true innovators who employed idiosyncratic rhythms, absurdist lyrics, free jazz, Delta blues, latter-day classical music and rock & roll to create a singular body of work notable for its daring and fluid creativity. While he never had mainstream success, Beefheart's fingerprints were to be seen all over punk, New Wave and post-rock.

In their original incarnation, Captain Beefheart and His Magic Band were a blues-rock outfit which became staples of the teen-dance circuit; they quickly signed to A&M Records, where the success of the single "Diddy Wah Diddy" earned them the opportunity to record a full-length album, Safe as Milk, which was released in 1967.

The Chocolate Watchband (listed here as "Chocolate Watch Band") is an American garage rock band that formed in 1965 in Los Altos, California.  The band's rebellious musical posture made them one of the harder-edged groups of the period with many critics labeling them as America's answer to the Rolling Stones. Though their first album, No Way Out, album did not chart nationally, the band had a huge following in San Jose and the SF Bay Area.

In 1967, Bill Graham urged the Chocolate Watchband to sign a management contract with him. He was opening up a new Fillmore East in New York City and wanted to shuttle the Chocolate Watchband, the Grateful Dead, and Jefferson Airplane from coast to coast as his personal house bands. But they had just signed a contract with another promoter a week earlier, their future followed a different path, a path that led to the dustbin of history