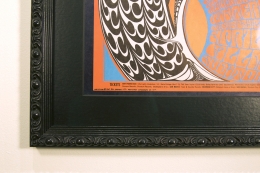 A frequently appearing characteristic of psychedelic posters was a visual pun on the names of the bands. One of the earliest examples of this is the peacock on this poster for The Byrds. There are three birds hiding in this feathery montage and The Byrds are likewise given triple billing. For a time in late 1965, the Byrds were as popular as the Beach Boys and the Beatles, pioneering the folk-rock sound and bridging the gap between acoustic and electrified instruments.

As the Byrds were based in L.A., this visit was a big occasion. Two months earlier they had released their 4th album, Younger Than Yesterday,” with the hit single, “So You Want to be a Rock and Roll Star.” Playing with them was Moby Grape, in production with their first eponymous album.

Artist Wes Wilson (who passed away in January, 2020) is an American artist and generally considered the father of the psychedelic poster. Best known for designing posters for Bill Graham of The Fillmore in San Francisco, he invented a style that is now synonymous with the peace movement, psychedelic era and the 1960s. In particular, he is known for inventing and popularizing a "psychedelic" font around 1966 that made the letters look like they were moving or melting. His style was heavily influenced by the Art Nouveau movement and his lettering in particular, inspired by Vienna secessionist artist Alfred Roller. Wilson is one of "The Big Five" San Francisco poster artists, along with Alton Kelley, Victor Moscoso, Rick Griffin, and Stanley Mouse.

This is a classic, flowing Wes Wilson design using his Albert Roller-style lettering, this piece is said to be the artist’s favorite of the nearly 60 posters he designed for Graham in 1966 and 1967.