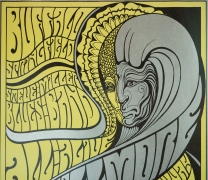 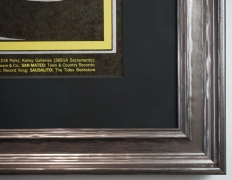 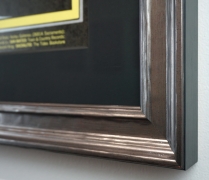 This poster showed Wes Wilson at the height of his powers mixing an arresting, flowing image with his stretching, expanding Vienna Secession-influenced lettering.  (Wes Wilson has an official typographic font named after him). This was Wilson’s  next to last for the Fillmore series and this poster announced the second appearance of the Buffalo Springfield at the famed venue.

The Southern California folk rock band Buffalo Springfield (named after a brand of steamroller) were the launching pad for the talents of Neil Young and Steven Stills as well as Richie Furay and Jim Messina . The band released three albums and several singles, including "For What It's Worth," and Young’s “Mr. Soul”. The band combined elements of folk and country music with British invasion and psychedelic-rock influences, and, along with the Byrds, were part of the early development of folk-rock. This show was one of the last ones before the original band fell apart.