Inside of frame at angle 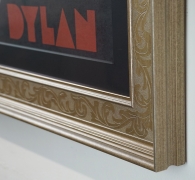 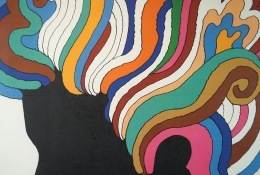 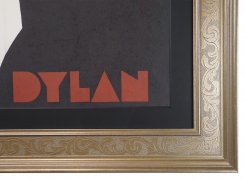 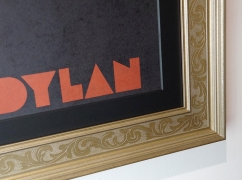 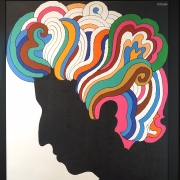 To generate positive publicity for his forthcoming album, Bob Dylan's Greatest Hits, CBS records commissioned Milton Glaser to design a special poster to be packaged with the album. Taking inspiration from a Marcel Duchamp self-portrait, Glaser depicted Dylan in profile, his abundant curly hair rendered in saturated colors that stood out in high contrast from the white ground. The energetic design with its swirling streams of color evokes the visual effects of psychedelics.

Echoing stylistic qualities of Art Nouveau and in line with his dictum “Just enough is more.” Glaser also invented his own typeface for the single word “DYLAN.”  The typeface was called Babyteeth, as Glaser writes,  “That was just an accident. I kind of had it on my desk at the same time. And I said if I have to use the word Dylan I’ll use this typeface largely because there wasn’t anything that looked quite like that around and I wanted to make the word itself look peculiar.”

The face in profile, blackened and looking down, the hair a color-pulsing mop of wavy ropes -- has been hailed as the ultimate expression of the psychedelic style in an American poster. This original poster was folded and included with Dylan's ''Greatest Hits'' album released March 27, 1967.  This original first-printing of the poster has been linen-backed to preserve it and lessen the original fold marks.

Milton Glaser (b.1929) is among the most celebrated graphic designers in the United States. Founder of New York Magazine, designer of countless posters for Pushpin Studios (which he co-founded), illustrations and magazine logos and designs, Glaser also created the “I ♥ NY” logo.