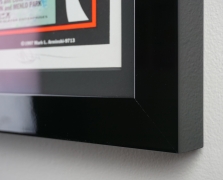 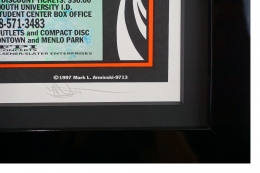 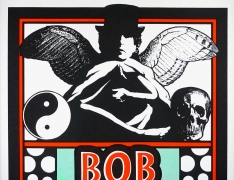 This is a sweet little silkscreen by important 1990s poster-revival artist Mark Arminski and features his signature in pencil. Bob Dylan’s Never-Ending Tour, which started in 1993, rolled on with 94 shows in 1997 including this one at Monmouth University in NJ. The 1997 tour consisted of  6 legs including Japan, the UK and 4 runs through parts of the US and Canada.

Dylan was mostly playing colleges during this tour including this one and shows at Smith College, Ball State, Hamilton College, SUNY Albany, University of Hartford, Brown, Bentley and the University of Southern Maine. This was an important tour because it allowed him to introduce himself to a new generation.

The setlist for this show, which included both electric and acoustic Dylan, was as follows:

Crash on the Levee

Tonight I’ll Be Staying Here With You

All Along the Watchtower

It Takes alot to Laugh, It Takes a Train to Cry

Friend of the Devil

Tangled Up in Blue

Stuck Inside a Mobile with the Memphis Blues Again

This Wheel’s on Fire

I Shall Be Released