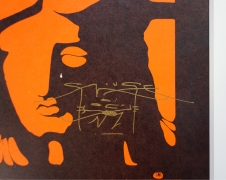 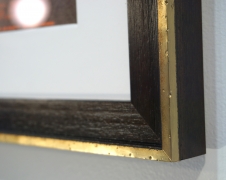 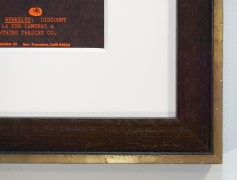 The central image is our Statue of Liberty with a tiny tear coming out of her eye. This is as appropriate today as it was back in 1968, whatever your persuasion.  Featuring a bright silver “Mouse doodle,” signature by Stanley Mouse. Blood Sweat & Tears were on their first tour outside of New York City where they formed in the Fall of 1967. Led by Al Kooper, the group had just released their first album in February which yielded the minor hits, “I Love You More Than You’ll Ever Know,” and “I can’t quit her.” Later on of course they had massive hits including “Spinning Wheel,” “You’ve Made me so Very Happy,” “And When I Die,” and “Hi-De-Ho.” John Handy was a New Orleans-based Jazz saxophonist  who brought his quintet into town for this show.

Son House was a was an American delta blues singer and guitarist, noted for his highly emotional style of singing and slide guitar playing.  House, born in 1902, sang the blues with little commercial success and finally faded from the public view, working as a railroad porter for the New York Central Railroad and as a chef.

In 1964, after a long search of the Mississippi Delta region, House was "rediscovered” by a group of young record collectors - whom they knew of from his records issued by Paramount and by the Library of Congress. He was unaware of the 1960s folk blues revival and international enthusiasm for his early recordings. The young guitarist Alan Wilson (later of Canned Heat) was a fan of House's. The producer John Hammond asked Wilson, who was just 22 years old, to teach "Son House how to play like Son House," because Wilson had such a good knowledge of blues styles. With this encouragement, he relearned his repertoire and established a career as an entertainer, performing for young, mostly white audiences in coffeehouses, at folk festivals and on concert tours during the American folk music revival, billed as a "folk blues" singer.