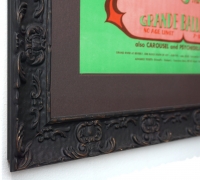 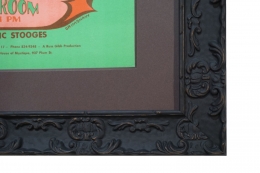 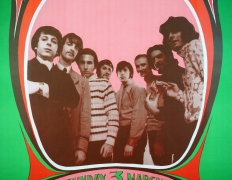 This first printing from the Grande Ballroom in Detroit was used to promote a Russ Gibb concert featuring Blood, Sweat & Tears, Carousel and the Psychedelic Stooges. Gary Grimshaw (1946-2014) was the leading poster designer in Detroit where his work was considered comparable to the San Francisco School out West. This was The Stooges and Iggy Pop’s second-ever concert, and this poster is the first one to mention their name. Because these posters were printed in extremely small runs of just 500, and the Grande was the epicenter of the 60s scene in the upper Midwest, these are highly valuable pieces.

In 1966, local schoolteacher and disc jockey Russ Gibb resurrected Detroit’s Grande Ballroom with the promise of live rock music. The new psychedelic ballroom attracted scores of suburban baby boomers and launched the careers of local legends like the MC5, the aforementioned Iggy Pop, Alice Cooper and Ted Nugent. Soon the ballroom's prestige attracted international acts like Cream, the Who, Jimi Hendrix, and the Jeff Beck Group.

Blood Sweat & Tears was a late ‘60s Jazz /Rock band that was originally formed by Al Kooper of The Blues Project. Kooper left the band in April of 1968, just a month after the release of the Band's first album and so this poster advertised one of the last shows that featured Kooper.