Benefit for the Grateful Dead after Historic Pot Bust, 1970 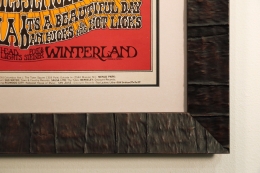 The Dead were known for playing at many benefits. But this time it was a Benefit for them!  On January 31, 1970, the Grateful Dead were busted for drug possession after a gig in New Orleans and so on February 23, just three weeks later, the leading San Francisco bands along with Bill Graham staged a benefit show to raise money for the Dead's legal fees. The bust was immortalized in the song, “Truckin”

“….Sittin' and starin' out of the hotel window.
Got a tip they're gonna kick the door in again
I'd like to get some sleep before I travel,
But if you got a warrant, I guess you're gonna come in.

Busted, down on Bourbon Street, Set up, like a bowlin' pin.
Knocked down, it get's to wearin' thin. They just won't let you be.”

The skeleton barrister, in blood-red jester outfit, bound by ball and chain, looks like he aims to make his point defending the band with his sword, while a legion of skulls look on in the background.