Close-up of bands on right

Close-up of bands on left 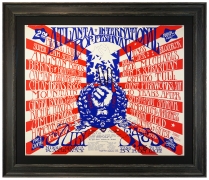 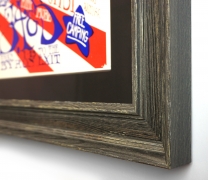 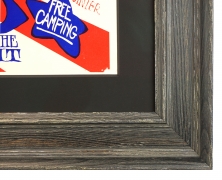 NOTE: This piece just sold - Please let us know if you would like to be contacted when we come across another one  -  ted@bahrgallery.com

Jimi Hendrix and the Allman Brothers on the same bill - Holy smokes!

The second Atlanta International Pop Festival was held in a soybean field adjacent to the Middle Georgia Raceway in Byron, Georgia, from July 3–5, 1970, although it did not finish until after dawn on the 6th. With hundreds of thousands in attendance, it was a major break-out for the Allman Brothers who were booked as local heroes. Macon was just 14 miles down the road and though their first album had only been released 9 months earlier, they were the only band to play two days on the Main Stage, opening and closing the festival on July 3rd and July 5th, respectively.

Like Woodstock, the event was promoted as "three days of peace, love and music." Tickets for the festival were priced at $14. Also like Woodstock, it became a free event when the promoters threw open the gates after large crowds outside began chanting "Free, free, free. Music belongs to the people" and threatened to overwhelm even the biker security crew the promoters had hired. Temperatures at the festival were sweltering, surpassing 100 degrees every day. Nudity and drug use were widespread, but local law enforcement officials, who knew they were vastly outnumbered, stayed outside the festival gates and employed a general 'hands-off' policy towards most festival-goers for the event's duration.

Jimi Hendrix performed at around midnight on the 4th to the largest American audience of his career, presenting his unique rendition of the "Star-Spangled Banner" to accompany the celebratory fireworks display. Hendrix’s performance is available on a double CD called Freedom: Atlanta Pop Festival and the Allman Brothers also recorded Live at The Atlanta International Pop Festival July 3 & 5th, 1970.

This original promotional poster for the festival was one of three designed by artist Lance Bragg to advertise the three successive pop festivals promoted by Alex Cooley: the first Atlanta Pop Festival and the Texas International Pop Festival, both in 1969, and this one – all of which featured a similar design motif. The posters for both Atlanta festivals are featured in the book The Art of Rock, which states, "The success of large-scale festivals, like the two Atlanta International Pop Festivals… helped create a new image for Southern rock.”

The condition of this poster is Very Good. Because it is large and on quite thin paper, we had it backed by archival linen, which is common with large thin posters in the traditional vintage market. Zoom in and you can see some corner damage that has now been stopped in it's tracks. Another benefit is that the entire poster is displayed, as the mat is touching the edge of the linen. The image area itslef looks terriffic.