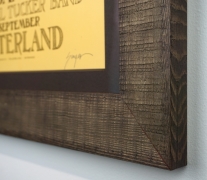 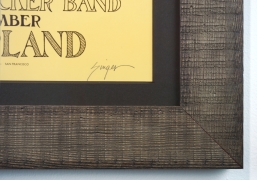 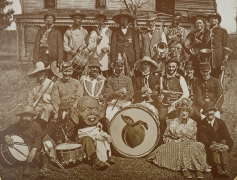 Original Allman Brothers posters from the 1970s and earlier are rare and hard to find, and that is certainly the case with this piece which also features a red-hot Marshall Tucker Band. This funky poster was created by David Singer for Bill Graham. Singer often used surreal images and themes in his work and here he’s found an image that is evocative of the Old South but also full of Felini-like weirdness. None of the band members were harmed in the making of this photo!

Few bands could have recovered from such tragic personnel losses as did The Allman Brothers Band in 1973. After the death of Duane Allman in 1971 and Berry Oakley the following year, few would have thought The Allman Brothers Band could carry on. One key to the group's remarkably successful recuperation was their recognition of the futility of trying to replace such distinctive musicians. Instead, the group brought in fresh blood in the form of pianist Chuck Leavell and bassist Lamar Williams. With the release of Brothers and Sisters, they ventured in a more countrified direction that won many new fans while retaining a good portion of the old. Having a hit single, "Ramblin' Man,“ that eventually became #1 didn’t hurt.

The Allman Brothers were peaking in 1973 - just two months before this show they had headlined the biggest one-day concert ever, Watkins Glen, on July 28 with the Grateful Dead and The Band. In 1973 the band was primarily playing huge sports arenas and outdoor festivals, such as Watkins Glen that summer; but, as a favor to Bill Graham, they agreed to play the much smaller Winterland (capacity 5,400) on this date.

The Marshall Tucker band had just released their debut album that Spring and were in excellent form. Southern rock fiddler Charlie Daniels later recalled that the Marshall Tucker Band "came onstage and just blew it out from start to finish.” Even more than the Allman Brothers, Marshall Tucker helped establish the genre known as Southern Rock.