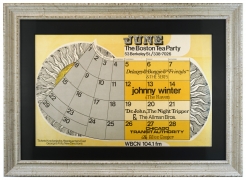 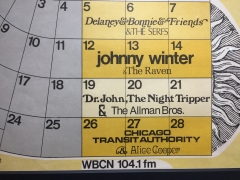 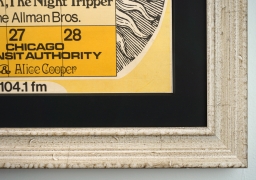 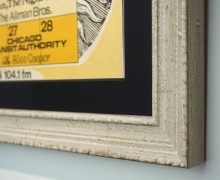 SOLD. Let me know if you want to be notified when we find another one: ted@bahrgallery.com

This rare June 1969 calendar of events at the Boston Tea Party featured a super-early appearance by the Allman Brothers, as well as the first East Coast shows by Alice Cooper and Chicago.

The Boston Tea Party was Boston’s psychedelic ballroom and presented rock shows from 1967 until 1970 when it closed for the same reasons as the Fillmore’s East and West: rock acts moved into arenas and stadiums. Located in South Boston and later across from Fenway Park, the Tea Party was owned by the same people who owned WBCN, which quickly became the top FM music station in Boston. In 1967, fresh Harvard Law graduate Steve Nelson was asked to manage the recently opened Boston Tea Party.

Steve Nelson notes, “I was very conscious of trying to develop an image for the Tea Party that set it apart from the psychedelic look of its counterparts on the West Coast. The work the poster artists were doing out there was spectacular, and I didn’t want to do a second-rate version of that, which is what the Tea Party had been doing when I came on board. I brought in my friend Bob Driscoll to do posters and ads.  He created an entirely new unpsychedelic look, spare, with lots of white space, very New York, minimalist, usually black and white, very Cambridge Design Research.”

That design aesthetic continued through the Tea Party’s existence which ended December 29, 1970. Eric Engstrom, along with Driscoll, were the venue’s primary poster designers.

The Allman Brothers were on their first trip up North and had first opened over Memorial Day weekend for the Velvet Underground and then stayed in a Boston flophouse until the shows listed here rolled around. They played a few times for free on Boston Common and Greg Allman writes in his autobiography, “The people up there [Boston] were really nice to us, but because it was our first time up north, and there was a way we talked, and we had a black guy with us, I’m sure it was rather confusing for them. They would hear us talk, and they’d be real amused. They used to say, ‘wait, wait - sit here and talk a while.”