Bruce Springsteen - A Night for the Vietnam Veteran, 1981

NOTE: This piece hung in the Nassau County Museum of Art, Spring 2019 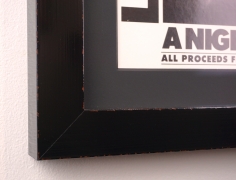 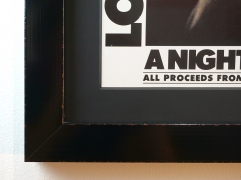 NOTE: This piece hung in the Nassau County Museum of Art from March-July 2019

The Vietnam War was the longest conflict in U.S. history. More than 58,000 Americans were killed and 304,000 wounded. The historic concert advertised by this poster was the second of three events that, by the end of 1982, had put the view of the Vietnam veteran in a much more positive and respectful light.

In January 1978, a small group of Vietnam veteran activists formed the Vietnam Veterans of America to help rehabilitate the image of U.S. servicemembers. Hindered by the lack of funding, the growth of membership was slow. But then the return of the hostages from Iran in January 1981 jarred loose a thought – why are the hostages getting parades down Main Street while Vietnam Veterans are shunned?

That year the competition began to create a Vietnam Veteran’s Memorial in Washington D.C. More than 1,400 designs were submitted with the winner being 21-year-old Yale undergrad Maya Ying Lin. The process raised awareness and willingness to talk about the Vietnam War, the veterans themselves began coming forward to speak about it, and the Vietnam Veterans Memorial was dedicated in November 1982.

In between these events, Bruce Springsteen became interested in the plight of veterans while reading Ron Kovic’s memoir, “Born on the Fourth of July,” and reached out to VVA co-founder Bobby Muller. The meeting led to a sold-out benefit, Aug. 20, 1981, at the L.A. Memorial Sports Arena which generated a much needed $100,000 for the VVA. It was the beginning of Springsteen’s career-long commitment to Vietnam veterans.

Introducing Muller in LA, he said. “It’s like when you’re walking down a dark street at night, and out of the corner of your eye you see somebody getting hurt in a dark alley,” he said slowly. “But you keep walking on because you think it doesn’t have anything to do with you and you just want to get home. Vietnam turned this whole country into that dark street, and unless we can walk down those alleys and look into the eyes of those men and women, we’re never gonna get home.”