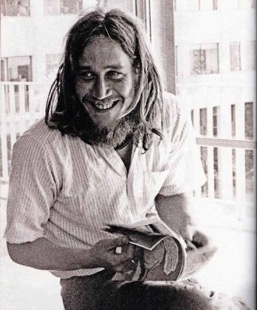 Gregory Rodman Irons was born in Philadelphia, Pennsylvania in 1947. He was self-taught as an artist, being influenced by early MAD pocket books. He moved to San Francisco in 1967, where he started out doing posters for the Bill Graham’s Fillmore Auditorium and some shows at California Hall and also a poster for Chet Helms at the Avalon. Through Bill Graham Productions, he has done poster art for bands such as Moby Grape, Jefferson Airplane, CSNY and Santana.

He then moved to London, England where he stayed until 1969, working on the classic Beatles animation 'Yellow Submarine' (1968) by George Dunning, starring The Beatles and based on designs by Heinz Edelmann. When he returned to San Francisco in early 1969 he did another 7 posters for Graham-produced shows at the Fillmore West and Winterland.

He continued making posters, as well as designing record covers and drawing comics, such as 'Heavy', published by the Print Mint in 1969, and “Yellow Dog.” Irons’ collaborations with writer Tom Veitch in the early 1970s included such titles as “Deviant Slice Funnies”, “Legion of Charlies”, and contributions to many other underground comix.

By the mid-1970s, Irons started doing more book illustrations, among others for Troubadour Press, Sunset Books and Bellerophon Books. He also began working as a tattoo artist. Just before his untimely death he was offered a position at Don Ed Hardy’s world-famous Realistic Studio, in San Francisco.

Greg had just received a magic tattoo from a Buddhist monk. In a postcard written at that time he said: “The tattoo came complete with religious ceremony at a monastery in the out-back, took three days to negotiate, but worth it. The 100-year-old monk blessed it and gave me a secret mantra to go with it.”