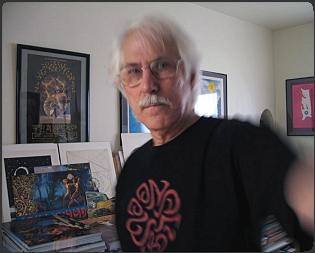 Best known for his Surrealistic collage illustrations for rock concert posters, David Singer is best known as one of the early Fillmore artists, designing 66 posters for Bill Graham, from 1969 to 1971.   Although Singer had little formal art training, his polished presentation and prodigious output made him one of the most respected poster artists emerging in the late 1960s in San Francisco.

Born in Quakertown, Pennsylvania in 1941, Singer was fascinated by the “Pennsylvania Dutch” signs and symbols around him on furniture, buildings and textiles. A schoolteacher taught him how to use a compass to draw the six-pointed “hex” sign. As an eighth grader he won a competition to design a seal for a new Quakertown high school, which he then attended. From an early age he collected pages from magazines, eventually building a huge collection of images. After graduation from high school, Singer enlisted in the U.S. Navy, and ultimately was stationed on Treasure Island in San Francisco Bay, working as a radio operator on a radar ship.

After his discharge in 1964 he settled in San Francisco, working at various jobs and ultimately working as an assistant to a sales promotion manager for an advertising company. He became interested in graphic art but was unsuccessful in gaining admission to two commercial art schools in Los Angeles or in finding work in commercial design in San Francisco.

He quit his job, began browsing through his collection of magazine images and taught himself collage by trial and error. Not initially interested in making posters, Singer assembled a portfolio of collages that he envisioned as "greeting cards or something." His work was rejected by most of the publishers in San Francisco but in May of 1969 and encouraged by Victor Moscoso and other San Francisco poster artists, Singer showed his portfolio to concert promoter Bill Graham. Singer recalled that Graham studied the works in silence for twenty minutes, and then commissioned Singer to create twelve posters.

Singer’s collages, influenced by Max Ernst, René Magritte and other Surrealists, and the Art Deco influenced lettering style on his posters turned the medium away from the wilder psychedelic style of Moscoso, Rick Griffin and Wes Wilson. To a great extent, Singer was a transitional rock-poster artist; his works possessed a refinement, even a polish that would dominate the 1970s rock world. During that decade he produced significant posters for the Rolling Stones, the Who, and Santana.

His artistic technique has evolved from cutting and pasting physical images and hand drawing lettering to creating collages and lettering using computerized design software. Although he has designed art for a wide variety of applications, much of his art has been for the music business and many of his recent posters have been for the band Moonalice. David singer currently lives and works in Petaluma, California.