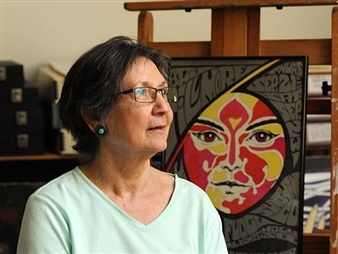 Bonnie MacLean was born in 1939 in Philadelphia and grew up in Trenton NJ. She graduated from Penn State in 1961 with a degree in French. She moved to New York after graduating college, where she worked at the Pratt Institute and took drawing classes in the evenings. MacLean moved to San Francisco 1963, where she met Bill Graham at her office job at Allis-Chalmers where he was her boss. By the time he left the company to work as the business manager of the San Francisco Mime Troupe, leading to his job as a rock concert promoter at the Fillmore, they were a romantic couple.

MacLean continued her administrative role under Graham at the Fillmore, handling finances, scheduling and obtaining permits. MacLean and Graham married on June 11, 1967, at their home on Sacramento Street. In lieu of a honeymoon, they attended the Monterey International Pop Festival the following weekend.

Wes Wilson was the main poster artist for the Fillmore Auditorium but when he and Bill Graham had a dispute about money and Wilson quit, Bonnie MacLean stepped in. MacLean had been painting noticeboards at the auditorium in the psychedelic style, which inspired Graham to promote her to Art Director. MacLean created more than 30 posters for the Fillmore, most in 1967, many of which are considered fine examples of the developed psychedelic style. Initially emulating Wilson’s provocative Art Nouveau-inspired posters, she quickly developed her own more nuanced psychedelic style which often incorporated gothic elements and showed off her talent drawing beautiful faces and figures.

Bonnie MacLean commented in an interview with The Key in 2015: “The one thing [Graham] wanted the most, naturally, was for the information to be available and to be understood — it had to be there, it had to be legible. But he didn’t have an agenda beyond that. He didn’t suggest the posters have any kind of imagery, he didn’t suggest anything in particular. We were free to do what we wanted to do, and that was a treat — I liked that part a lot.”

MacLean and Bill Graham were divorced in 1975 and she moved to Bucks County, Pa., in 1971, with her son David Graham and artist Jacques Fabert, who would become her second husband in 1981. She worked there as a fine artist, with a focus on nudes and landscapes, until her death in February, 2020, ironically just weeks after Wes Wilson passed.

While MacLean was not recognized as one of the “Big Five” Haight-Ashbury poster artists who came to be associated with the iconography of the counterculture scene, she stood out as one of the only women in the field and her work is just as revered among collectors. It has been displayed in San Francisco’s de Young Museum, the San Francisco Museum of Modern Art and the Oakland Museum, as well as the Whitney and the Museum of Modern Art in New York.