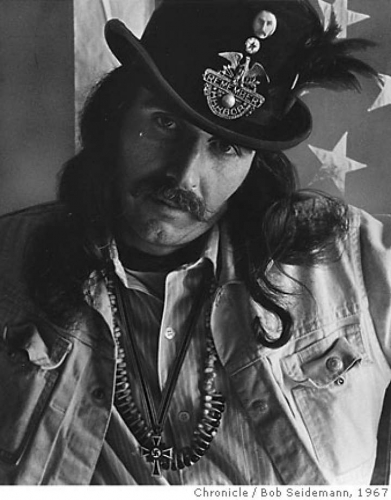 Alton Kelley, while the least artistically talented of the “Big Five” San Francisco poster artists, had perhaps the largest role in launching the graphical arm of the psychedelic poster scene.

Born June 17, 1940 in Houlton, Maine, Kelley is remembered as the creator (with his artistic partner, Stanley Mouse) of hundreds of classic psychedelic rock posters, such as the famed "skull and roses" poster for a Grateful Dead show at the Avalon Ballroom. Mr. Kelley and Mouse created 26 posters for just the first year of the Avalon's operation.

But prior to that, Kelley was one of four people who called themselves The Family Dog and decided to throw the world's first psychedelic dance-concerts at Longshoreman's Hall in September 1965, essentially starting the San Francisco scene. The quartet had just returned to the Bay Area after spending an LSD-drenched summer restoring a silver rush dancehall in Virginia City, Nev., called the Red Dog Saloon.

Mr. Kelley, a motorcycle enthusiast since his youth, who painted pinstripes on bike gas tanks, designed the flyers advertising the original Family Dog shows, but lacked drafting ability. When he met Stanley Mouse, who had recently relocated from Detroit where he made a name for himself doing hot rod art, Mr. Kelley found the draftsman he needed. The two formed Mouse Studios and cranked out art together, with Kelley's drawing skills eventually improving to the point where left-handed Kelley would be working on one side of the easel, and right-handed Mouse on the other.

"He had the most impeccable taste of anybody I knew," said Mouse, "He would do the layouts, and I would do the drawing." They worked together steadily for 15 years and on and off thereafter. Their Mouse Studios was located in a converted Lower Haight firehouse in San Francisco where Janis Joplin first rehearsed with Big Brother and the Holding Company. They also opened a store called Pacific Ocean Trading Company (POT Co.), one of the first head shops in Haight-Ashbury.

Mouse said they could work for hours in silence. "We knew what to do," he said. "We didn't have to talk." During the heyday of the Avalon Ballroom, the pair would frequent the SF Public Library (otherwise known as “the Internet,” in 1967), looking for images they could employ in their poster-making. "Stanley and I had no idea what we were doing," Kelley told the San Francisco Chronicle in 2007,"but we went ahead and looked at American Indian stuff, Chinese stuff, Art Nouveau, Art Deco, Modern, Bauhaus, whatever. We were stunned by what we found and what we were able to do. We had free rein to just go graphically crazy. Before that, all advertising was pretty much just typeset with a photograph of something."

The work of Kelley and Mouse has come to be recognized as a 20th century American counterpart to the French poster art of Henri de Toulouse Lautrec during the Belle Époque, although the two psychedelic artists never imagined at the time they were creating anything of enduring value, anything more than another crazy poster for this week's Avalon show. "We were just having fun making posters," said Mouse. "There was no time to think about what we were doing. It was a furious time, but I think most great art is created in a furious moment."

Kelley continued to make posters all his life, although his artwork in the recent past concentrated on his air-brushed paintings of hot rods and custom cars that was both sold as fine art and reproduced on T-shirts. He died in Petaluma California in 2008.