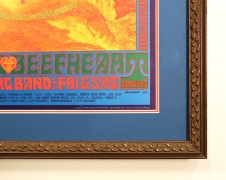 Yes there were other poster artists of the time! Bob Schnepf’s blinding white and yellow graphics gave this poster it’s nickname, Flash. “A new singing group,” The Doors headlined and were still riding high following the Summer of Love  and their hit single Light My Fire.  It wasn’t all they played at this concert though as they had released their second album, Strange Days, two days before the show.  Listen to Light My Fire from the Sept 29 show by googling: “Doors Sept 19 1967 Denver Light My Fire”

The first night they played at University of Denver, and the second at the "Denver Dog," the theatre at 1601 West Evans Ave being leased by San Francisco-based rock dance promoter (primarily at the Avalon) The Family Dog.